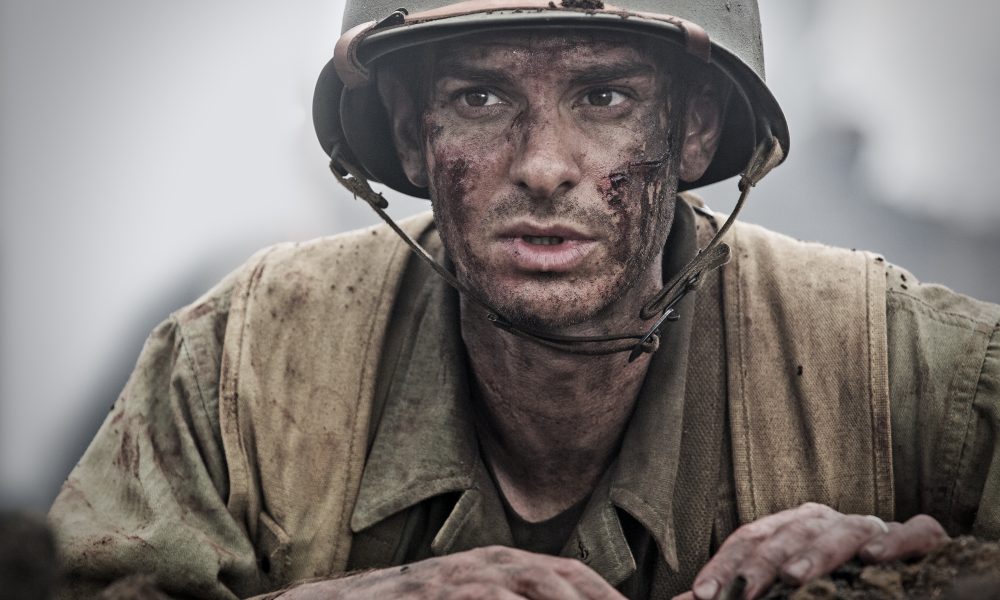 Many people talk about their faith but very few stand in it within the mist of hell. Hacksaw Ridge is a true story of Army soldier Desmond Doss’s live during World War II. This isn’t your typical war story. It’s one that demonstrates the love of one man for this fellow man. In fact, the director this a love story instead of a war story. Desmond Doss joined the army during World War II with the idea of saving lives instead of destroying them.  He was given the medal of honor from president Harry Truman for saving the lives of 75 men by single-handedly pulling them to safety.

In the movie, Desmond Doss is played by actor Andrew Garfield. He is a television, film and stage actor that was born in Los Angelo’s but grew up in the UK. If he looks familiar, it’s because he played Spider-Man in the movie “Spider-Man 2” back in 2015.

Desmond Doss refuses to handle a gun in the movie “Hacksaw Ridge”.

Just like in Spider-Man, Garfield’s character is one that demonstrates incredible courage in the film Hacksaw Ridge. Garfield is a good choice for this leading actor role. He’s able to portray a character that comes across as docile, yet has burst of fierce courage that rears its head from time to time throughout the movie and goes into full throttle during the battle scenes.  So, what director took on the task of directing this powerful movie.

It was none other than actor/director/producer Mel Gibson. Hacksaw Ridge is Gibson’s 5 motion picture directorial debut.  Gibson describes Desmond Doss as a man with confection and faith going into a situation that reduce most men to the level of animals where he horns his spirituality and achieve something higher, above war, religion, everything and perform acts of love in the mist of hell.

Director Mel Gibson on the set of “Hacksaw Ridge”

Actor Hugo Weaving plays Desmond Doss’ alcoholic abusive father Tom Doss who served in World War I. Weaving’s character struggles with his own disappointments of World War I due to the death of his childhood friends that didn’t make it back from the war.

The war scene is not for the faint at heart. It’s bloody and will defiantly keep the audience on the edge of their seats. The images are sure to stay with you for several days after viewing the movie.

This is a first feature film role for actor and war veteran Damien Thomlinson who plays Ralph Morgan.

Family Dynamics in “Almost Christmas” Makes It a Must See This Holiday Season.
“Sleight” Sets Stage for Intellectual Superhero