In a world were crime becomes the norm, a play comes along that takes us back to a time of urban communities were people genuinely cared and looked out for one another. It was a time were kids went out play but made sure they made it home when the street lights came on. “Hood Rich” is that kind of play. 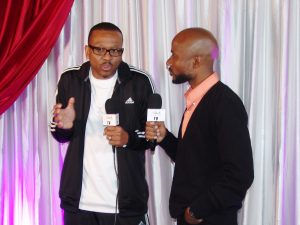 “Hood Rich” was written by Pastor Terrell Monger and made it’s debut last month to a near sell out crowd at the Cannon Center of Performing Arts in Memphis. As attendees made their way thru the entrance, they were greeted with old school music from MAC Production along with people selling  “Hood Rich” t-shirts.

Let’s not forget the Hood Rich, Candy Lady  with her whole arsenal of candy. Just about every type of candy you can think of from back in the day was for sale. With prices like 5 cents, 10 cents, 25 cents, one could get their sweet tooth satisfied for just a buck.

You won’t find any celebrity or famous actors in this production. Pastor Monger used all local actors with little or no acting experience with a stage production. “We brought in an acting coach”, says Pastor Monger. 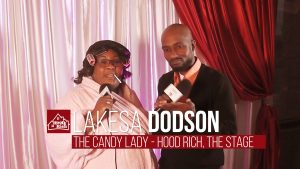 LaKesa Dodson with Brandon Person on the Red Carpet.

LaKesa Dodson is one of those cast members that had no acting experience. Hood Rich was her first stage production but she came across as a natural when she was interviewed on the Red Carpet. Dodson plays the Hood Rich Candy Lady. With her cigarette hanging out of her mouth, she played true to her character. When asked about the character she will be playing, Ms. Dodson replied, “We plan to see a lot of candy being sold and a lot of money being made”.

Pastor Monger wanted to create a stage play that tells a story about the black communities through the eyes of someone that was a product of that community.

“In this play, we wrote the picture of what that Black love looks like and how we can recreate it under our own narrative.” 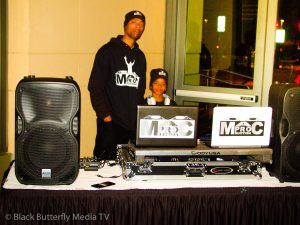 “Hood Rich” is Pastor Monger’s fourth stage play. He wrote his first stage play, “Use Me Until You Use Me Up” with his former rapping partner, Tela James.

The second play was entitled “Something She Can Feel”, which dealt with the emotional needs of women and how men use it to manipulate them. His production company, IN ME Production, will be shooting a movie based on this stage play this summer.

The third play was “Mr. Provider” which dealt with how the good guy gets looked over and the bad guy gets all the attention.

One of Pastor Monger’s goals is the take the plays on the road traveling to different cities. “You can only reach some many people in the church… One new thought can create a whole new life”, says Pastor Monger.

So American, get ready for the “Hood Rich” stage play when it comes to your city. The stage production will be hitting the road in June with its first stop in New Orleans, LA.

For those who can’t wait to see the “Hood Rich” the stage play, dvds of the play is available at inspirememphis.com along with the “Hood Rich” soundtrack which includes 14 original tracks.

Video interview with christian rapper Yung Titan who performs on the “Hood Rich” soundtrack along with his wife Erin Divine.